What first comes to mind if someone mentions the television show, Hawaii 5-0? The muscular actor who plays Commander Steve McGarrett, or perhaps a clever plot twist in an episode involving identity theft? More likely it’s a visual of tanned young surfers riding the perfect wave to the shores of Waikiki, or perhaps a volcanic peak rising from the mist above the rainforest. How about NCIS – New Orleans? Those who’ve seen the show might picture Scott Bakula chasing a murderer through the crowd of perennial spring-breakers on Bourbon Street, or maybe tracking a psychopath by airboat through the gator-infested bayous of Cajun country. Most TV shows and movies rely on setting for more than just backdrop. The setting becomes as integral to the story as protagonists and villains.
Yes, movie and television rely primarily on visuals, but books paint pictures in the minds of readers. Consider the imagery created by Michener’s South Pacific, John Grisham’s The Testament, or Charles Dickens’s Great Expectations. Could you imagine moving Oliver Twist from the slums of London to the heath-covered Scottish highlands? I don’t think so. Setting can be either protagonistic as in Jane Eyre or Under a Tuscan Sun or antagonistic as in Steinbeck’s Grapes of Wrath or Jack London’s Call of the Wild. Whether creating a romantic spot to rekindle the flame of lost love, or a dangerous snake pit from which characters must escape, an author must choose carefully to create a memorable world that readers can see, hear, taste and smell.
When an author contemplates a new series, location becomes even more crucial. Consider Jan Karon’s marvelous series set in Mitford, or Debbie Macomber’s lively romances in Cedar Cove. One of my favorite series by Nevada Barr involves Anna Pigeon, a federal park ranger engaged to an Episcopal priest. Mystery series particularly benefit by a change in locale as characters adapt to new challenges, both natural and man-made. Personally, I love to travel. I often set stories far from home, making several trips for research and to tweak final details. As my husband and I travel around the South, I find plenty of settings for my books. 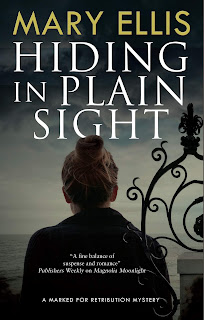 For book one of my brand new series, Marked for Retribution Mysteries, I decided Charleston would be the perfect setting. In Hiding in Plain Sight, Kate Weller rents a room above an Italian restaurant owned by a handsome chef, where she lands in the middle of a family feud with robbery, arson and murder for the daily specials. Available in hardcover or in e-book, including B&N and Amazon.

This site uses Akismet to reduce spam. Learn how your comment data is processed.